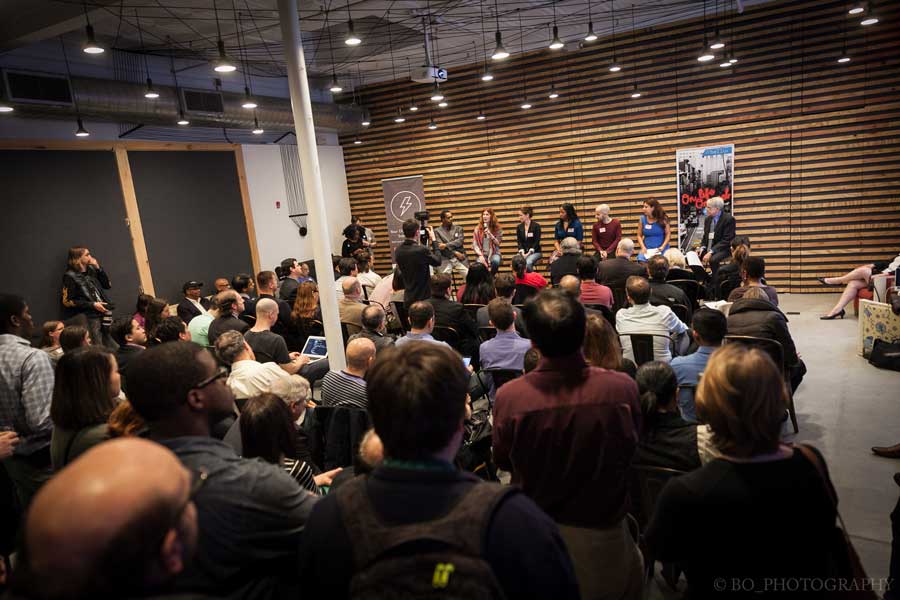 The NYC Changing Digital Landscape event was hosted by Meetup.nyc along with NeedGrowth.nyc at an Interface event space on March 10th, 2016.

How Technology is Effecting Everyone

This event was promoted and supported by immense amounts of press and outreach, including Digital.nyc, NY Greater Chambers of Commerce, LinkNYC and many more. It was shaping up to be one of the largest .nyc centric tech events: 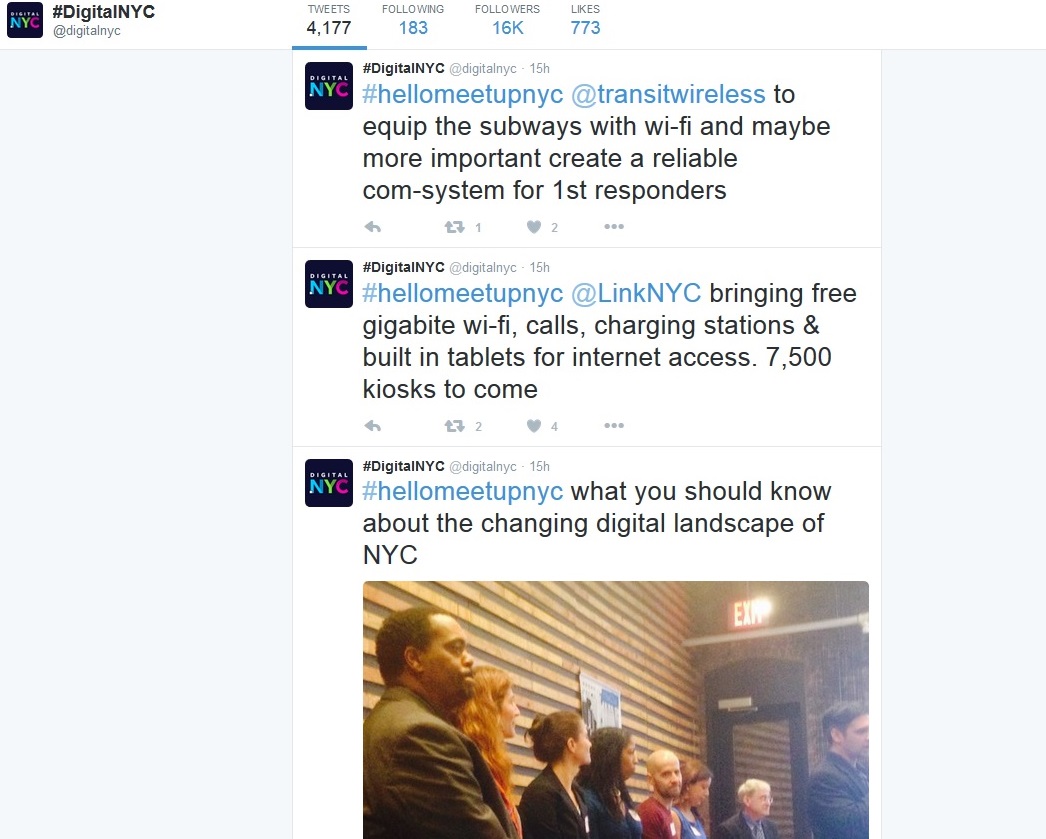 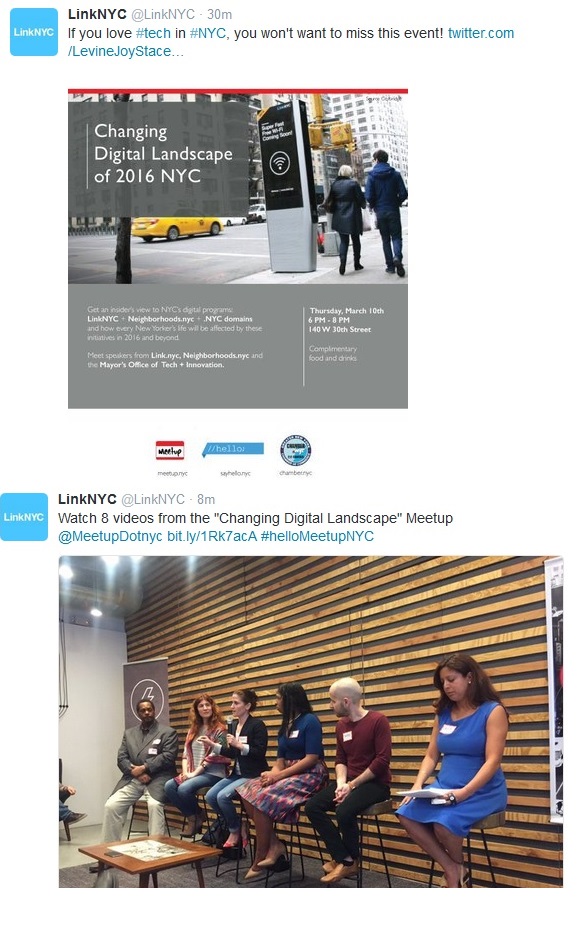 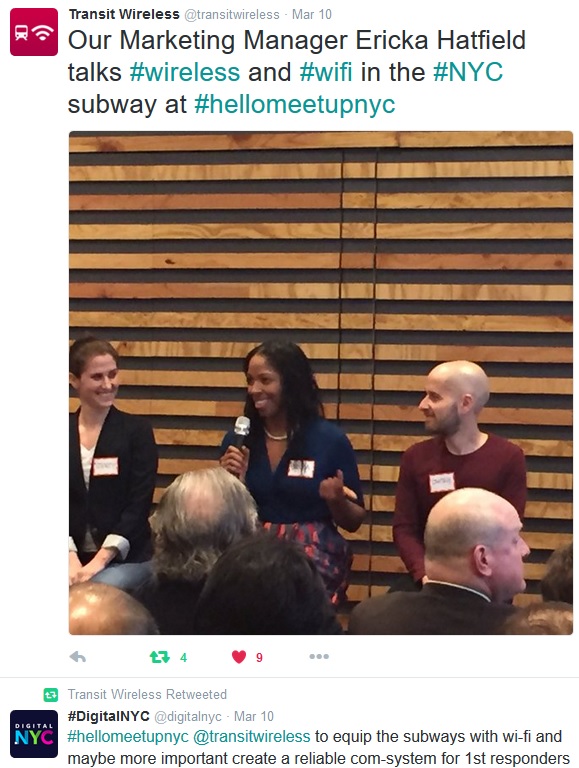 The differences between the “tech” and “non-tech” worlds within New York City have begun to blur, ushering in an era of digital connectivity in the fastest evolving city in the world.

This drastic change is effecting everyone within the community of the Big Apple. It is fascinating to see that local government is both incorporating, and bolstering these transitions into a digital landscape.

An assembled expert panel of city officials and entrepreneurs spoke to more than 150 people in an at capacity cowork space, on how a more connected New York ecosystem is effecting and benefiting all of us, especially NYC businesses. The increased turnout from this year to the last, is already a clear indicator of this rapidly expanding enterprise, and how it has begun to encroach onto other fields, for the benefit of everyone involved. 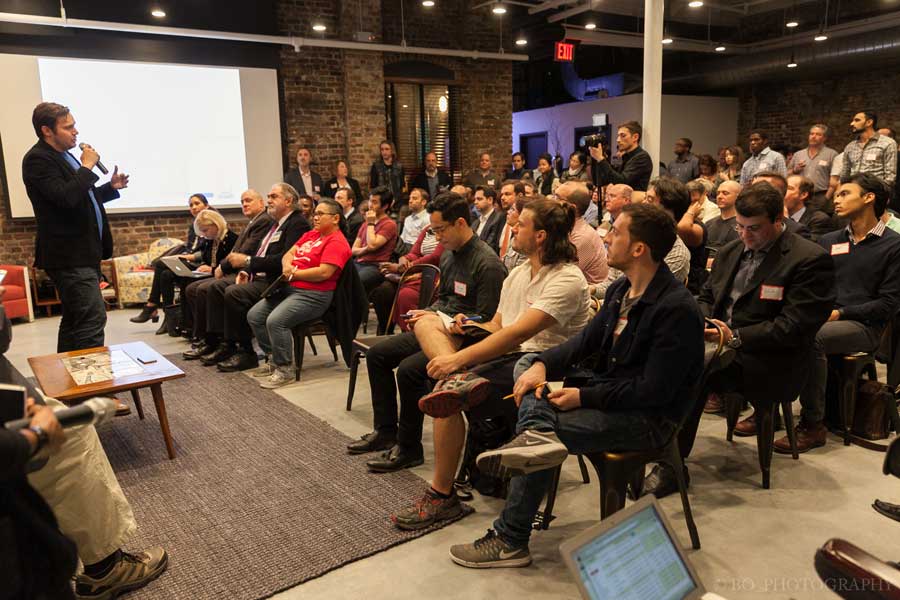 New York City is currently one of the most tech innovative cities in the world, and it is trying to lengthen its lead with initiatives that affect every single person and business in the city with the support of local government and innovative entrepreneurs. We can stop change, we can fight it or embrace it. The entirety of New York is embracing the change, and our line up of speakers brought the latest news and innovations to the fore front. This is the future of NYC and the people in the room live and breathe the tech changes. 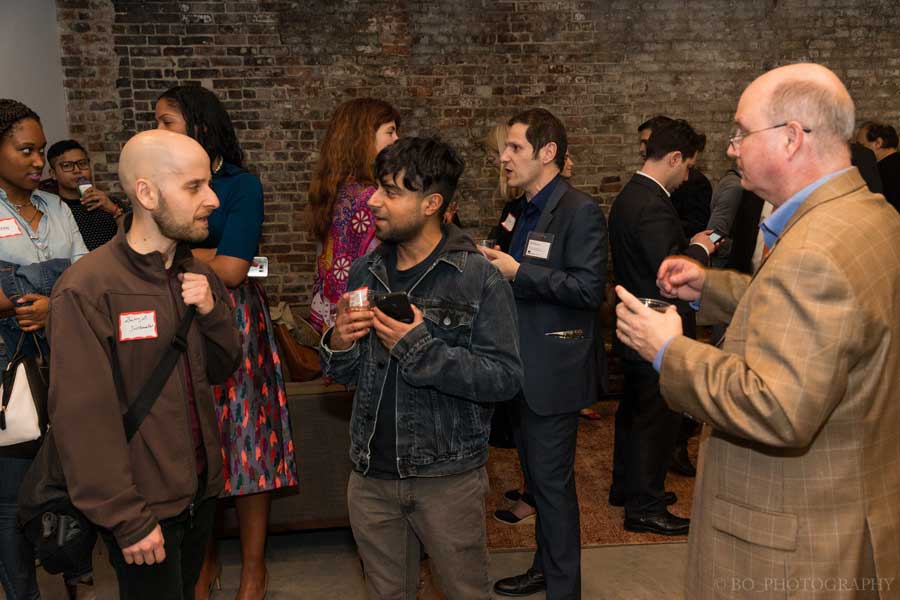 Prior to the opening speakers and panelists, there was a meet and greet where business leaders from all manner of experience and fields were given the great networking opportunity to mingle over complimentary wine.

Present were CEOs, CTOs, startup founders, small and medium sized business owners, digital agencies, creative directors, young opportunists, and everything in between. As the wine flowed, people were networking and having a great time, allowing for attendees to really discover the effects of .nyc on other fields and businesses.

It was a rare chance for everyone across multiple industries to meet with the NYC Chamber of Commerce, to really understand the future of business in New York, and how they can be a part of it.

Art Malkov, from Meetup.nyc, co-organizer for the event, enlightened the crowd about .nyc and promoted how it can be adopted by those from every flavor of life. His own startup, www.Souvenirs.nyc, is built on the .nyc platform, and was an SEO case study for the .nyc registry.

Gerardo, Albasar from SayHello.nyc, was one of the event’s sponsors and runs a .nyc focused registry. He provided a phenomenally great chance for all the event attendees to explore the possibilities of .nyc with a free one year .nyc domain, complete with free hosting and webmail.

Drew Moffitt, from NeedGrowth.com, is a seasoned entrepreneur, veteran marketer, and prominent figure within the New York city tech community. He is a partner at NeedGrowth, where he works with startups, small businesses, and mid-cap companies to accelerate growth and revenue.

Speaking from rising trends with NeedGrowth clients, Drew echoed the blurring of the lines between “tech” and “non-tech”. Describing it as a move towards a world where everything is redefined as industry + tech: AdTech, FinTech, etc.

Drew described how this inclination doesn’t just apply to smaller companies, but is evident within the largest of the tech giants. Few people know that the highest dollar per square foot retailer in the world is a tech company, Apple, while the largest big data logistics platform is operated by a “traditional” retailer, WalMart.

Mark Jaffe, from Greater New York Chamber of Commerce, is the President & CEO at the Greater New York Chamber of Commerce, a not-for-profit organization committed to serving over 30,000 business and civic leaders within the great metropolis. In recent years, the Chamber has worked alongside mayors and government officials to champion technology within NYC. He is also a proud partner of the .nyc initiative, of which there are now over 90,000 domains. 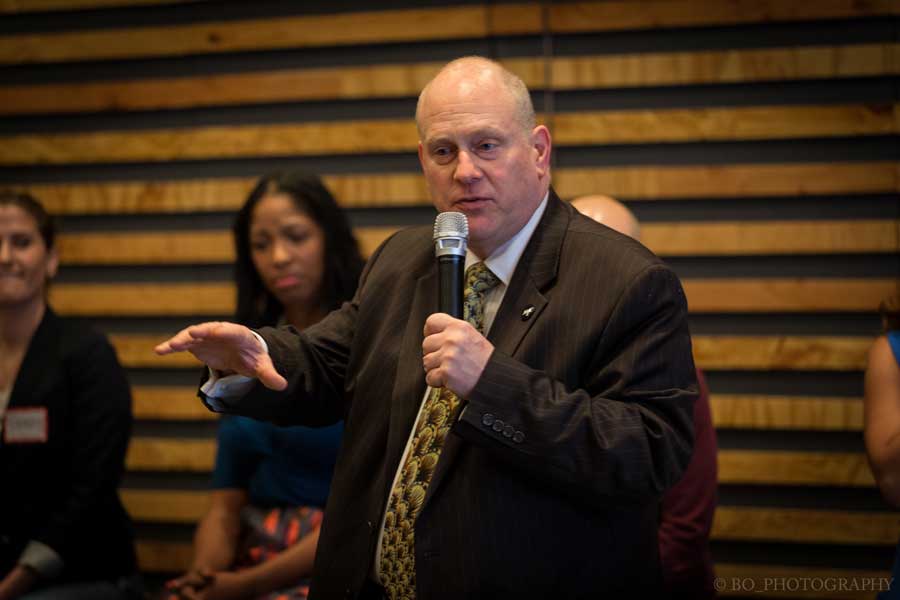 Mark talked about his most recent trip to China, from which he had only just returned, where he aided the United States Ambassador and officials from LinkNYC raise $176 million from over a hundred investors in Beijing to support the rollout and development of high-speed free public wireless internet, which will complete the “Smart City” program for New York. When finished, LinkNYC will have over 7,500 free public wifi hotspots in all five boroughs. This is a monstrous undertaking that will provide a 10x improvement to digital connectivity within the city, effecting not just businesses, but all residents of New York City, and provide internet speeds 200x faster than current public wifi.

Clayton Banks, CEO & Founder of Silicon Harlem, and who has previously worked with the National Association for Multi-ethnicity in Communications (NAMIC) is transforming Harlem into an innovation and technology hub in New York. Their goal is to lead urban communities into the future of tech development and economic prosperity. His program began in 2013, when there were literally zero coworking spaces available in Harlem, but since then, 7 now exist. The non profit organization has even received accolades from the Inner City Foundation of New York.

Coworking Communities in Harlem are Exploding

Harlem has become the fastest growing tech community in Manhattan with the aid of Silicon Harlem, which has supported the growth of the technology startup and social venture sector as a part of advancing economic and social development in Upper Manhattan. The company has even developed educational programs for youth and adults alike, with the knowledge that for every tech job, five other ancillary jobs are created in the service sector.

Aileen Gemma Smith, CEO of Vizalytics Technology, mission is to enable change with data. She started her company over 3 years ago, around the time that her hometown of Staten Island was hit by Hurricane Sandy, which had immediate repercussions for the community’s residents and businesses who were unable to obtain pertinent information.

This led to the launch of Vizalytics’ first product, Mind My Business, which is a mobile app that is used by over 2,000 businesses in New York City alone, and lets business owner know everything that happens in and around their business, such as risks for fines, construction in the area, etc.

Because of this breakthrough technology, Vizalytics was approached to partner with the New York City Mayor’s office of Technology and Innovation to build Neighborhoods.nyc, a website that draws from the Knowledge Graph to provide traffic, transit, quality of life, health, inspection, event, and other information about each of the more than 400 neighborhoods in the city’s five boroughs.

The site allows, on the most local levels, for NYC residents to receive real time information allowing for safer, healthier lifestyles and fewer daily delays, without even having to download an app. The site runs in 13 different languages allowing for maximum connectivity for New Yorkers. Neighborhoods.nyc will be launching in late march 2016 (just a few weeks away!). 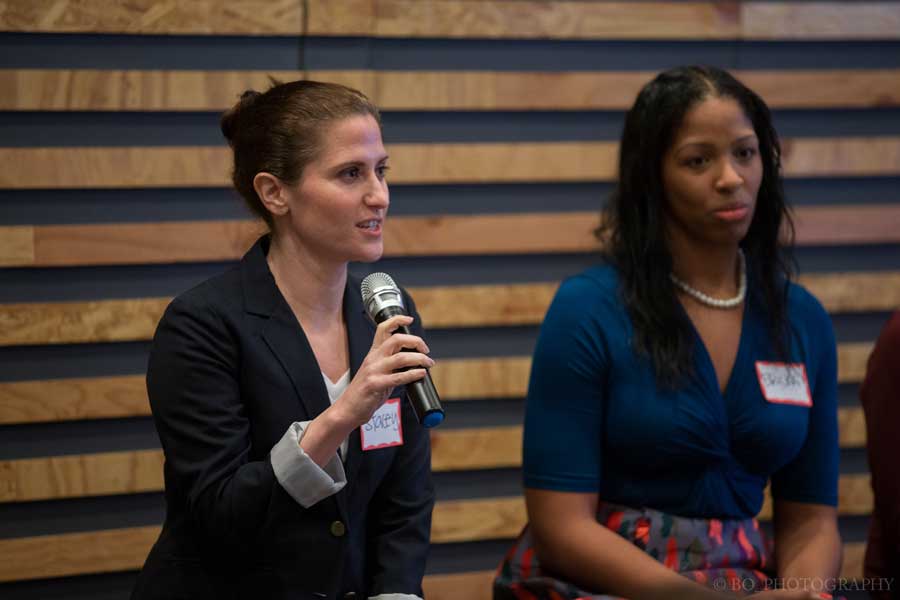 Stacey Levine is the Communications Director at Intersection and LinkNYC. LinkNYC began with back in 2013 when Bloomberg held a design contest with the aim of finding new purpose for the City’s expansive payphone network.Control Group, a company focused on tech and design, merged with Titan, which specialized in out of home advertising and owns municipal media all over the country. Together they became Intersection and submitted their design to the contest, and won, earning them a 12 year franchise agreement from Mayor De Blasio.

LinkNYC is the first of its kind communications network that will replace over 7,500 pay phones across the five boroughs with new structures called Links. Each Link will provide superfast, free public Wi-Fi, free phone calling, and device chargers along with tablets for Internet browsing, access to city services, maps and directions. The service is 200 times faster than the current public Wi-Fi, which is even faster than the speeds New Yorkers can purchase, and all 100% for free.

Because of the 55 inch displays on each Link kiosk, the service pays for itself by becoming one of the most advanced advertising networks in the world, which will allow businesses to advertise out-of-home in a unique way that benefits residents and businesses alike.

The first Link kiosk was installed on December 20th, 2015. Today, there are 96 kiosks put up, and 31 which are already running. LinkNYC is working round the clock and installing dozens of new kiosks every week in order to bring fast, free Wi-Fi to all five boroughs of New York City, making this a literal “Smart City”.

Erica Hatfield is the Communication Director at Transit Wireless. Transit Wireless is the company that is impacting and connecting the two most important things to New Yorkers: the subway and their devices. Transit Wireless is outfitting all 279 underground subway stations with free cellular Wi-Fi, as well as 4.9, which is a private band that allows New York City Transit personnel, the Fire Department, and Police Department to communicate on a separate band from the public (increasing public service speeds).

So far 147 stations are already live with the service in all of Queens, 14th St and up in Manhattan and through the Bronx. They are currently working on making Wi-Fi services available in downtown Manhattan and Brooklyn, so expect that soon.

The project began in 2005 with a 28 year contract, and they work with all four major carriers: Verizon, AT&T, T-Mobile, and Sprint who all signed up with the project. The partnership is a result of a need to overhaul the MTA system, which is over a century old; a massive undertaking. Transit Wireless engineers must redesign each station and plan for extreme temperatures, motion, and dust in order to keep New Yorkers connected.

The first station was complete in 2011, and already carriers have been required to upgrade their equipment, as New York City has quickly become one of the top five consumers of data in the world. By the end of 2016, all stations in New York City will have top speed free Wi-Fi access. 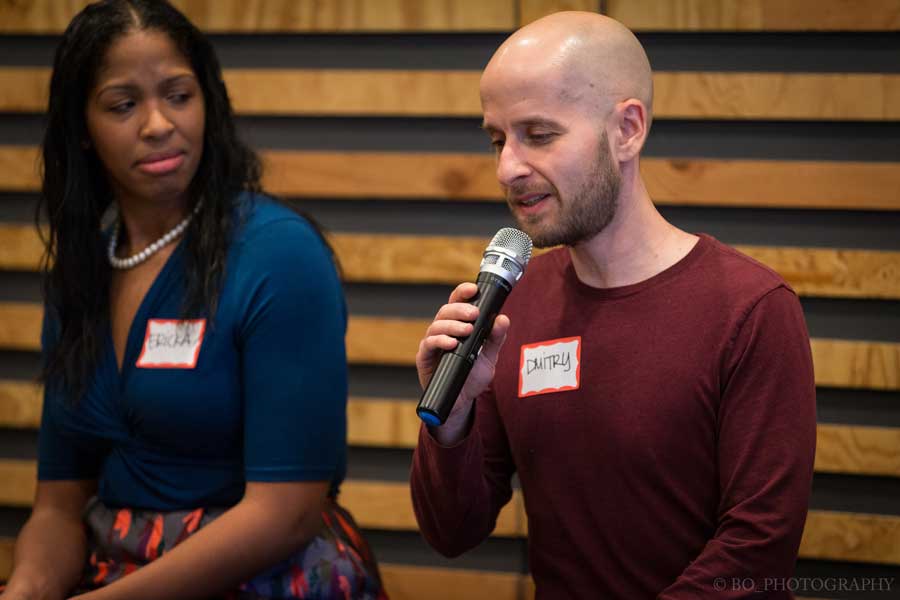 In 2014 Dmitry used JustReachOut to scale a startup from 0 to 40M+ page views, which was later acquired by Google. JustReachOut helps people do smart PR and content marketing, and guides startups in the process of acquiring press outreach, a necessary step for any growing business. Dmitry has been doing marketing for over a decade, and has seen first hand how huge a game changer .nyc has been for New York City businesses and startups, as it is a tremendous marketing opportunity.

Erica Gonzalez, Digital Strategy Director at New York City Council, is the senior advisor to the Speaker of the City Council. In April 2015, New York City Council Speaker Melissa Mark-Viverito introduced Council 2.0, a roadmap for making the Council more accessible and transparent through digital technology. This plan includes the “Council Labs” website, engagement through social media and SMS, and working with Open Data. It is a revolutionary way for NYC locals to get involved with how the city is run, since the Council carries equal weight to the Mayor’s administration. From new legislation, budgeting, and even land use, it is easier than ever for residents of New York City to know, and be involved with the evolution of this city.

The Council has never had anything like this before, and neither does any other municipal body, meaning there are no existing models which could be adapted. In order to create this innovative, open system the Council has partnered with others to expand and advance the current Council structure which includes 51 districts and directly affects the New Yorkers within them. The initiative is designed to allow for further innovations in New York City and allow the Council to be more agile and better equipped to handle the needs of New York City residents by giving them a place in government decisions.